About the PSBA-Manila DRM Unit

The Philippine School of Business Administration Manila (PSBA-Manila) was founded in October 1963, initially called Philippine Accounting and Taxation Training Services, Inc. (PATTS) and has produced top placers in the National Certified Public Accountant (CPA) board examination. After three years of operation, because of consistent top performance of its student reviewees, it was incorporated into a full-fledged school in 1966, renamed as the Philippine School of Business Administration (PSBA).

The Philippines has witnessed a large number of natural calamities, primarily from typhoons and floods. The number and intensity of these severe weather events heightened due to the effects of climate change. The tremendous damage caused by these disasters to lives and businesses has prompted PSBA-Manila to do research on Disaster Risk in order to mitigate or minimize the damages not only for the School, but also for inclusion in its programs on business continuity.

Thus, Researches on Disaster Risk in PSBA started in 2001, when Dr. Teodoro Santos and Prof. Harry Lorenzo along with Dr. Teodorico Molina approved the proposal of Dr. Tabassam Raza, while taking up his Doctorate in Business Administration, for his dissertation that was focused towards Disaster Risk Management (DRM). The pilot research entitled “Strategic Model: Conceptualization and Implementation of a Total Disaster Risk Management: Cherry Hills Tragedy, Antipolo City”, was published in 2003 as a first of its kind of researches on disasters in the Philippines. In 2003, the Disaster Risk Management Unit (DRM Unit) was founded under the Graduate School Research Center of PSBA where Dr. Raza was appointed Special Associate for the DRM and Information Technology (IT) Researches and Projects for PSBA. From here on, researches on DRM with focus on Business Continuity were done under the name of the School.

One of the primary objectives of the DRM Unit is to provide support for formal DRM education for local and international citizens in order to uphold the Republic Act 10121 of the Philippine Government, which mandates to “Uphold people’s right to life and property… by addressing the root cause of vulnerability to disasters…”, and the lack of a formal DRM education in the country is a huge gap causing vulnerability of its citizens to disasters. This aligns with the Hyogo Framework of 2005-2015 and its continuation, the Sendai Framework of 2015-2030, citing the need for DRM to be incorporated in public and private institutions, including academia.

On October 1, 2013, PSBA-Manila began estimating demand for this formal specialization program on DRM and prepared its course contents, governing structure, and established partnerships. In 2015, PSBA-Manila requested formal authorization from the Commission on Higher Education (CHED) to offer the Disaster Risk Management specialization in its existing Master in Business Administration (MBA-DRM) program. After two years of keen evaluation and acquiring proper authorization, the goal for the DRM Unit was realized as the MBA-DRM program was launched in the first semester of Academic Year (AY) 2017-2018. PSBA-Manila became the first private Higher Education Instution (HEI) to offer a formal DRM program in the Philippines.

Presently, the DRM Unit has research fellows from local and international fellowship partners who research on significant DRM topics and share their expertise and knowledge on DRM in changing climate at various international symposiums and colloquiums co-organized by PSBA-Manila.

Mission of the DRM Unit

To enable men and women achieve their leadership and frontliner role in the field of Disaster Risk Management in changing climate especially focusing on Business Continuity/Contingency; and raise awareness, knowledge dissemination, and mainstreaming Disaster Risk Management, Climate Change Adaptation, and Sustainable Development in every aspect of the community from local to national levels.

Objectives of the DRM Unit

The DRM Unit has a total of 42 personnel as part of its research fellowship program and internal support staff as of April 2018. The organization’s departments are staffed by qualified and capable people whose expertise covers a broad range of topics related to DRM with focus on Business Continuity. 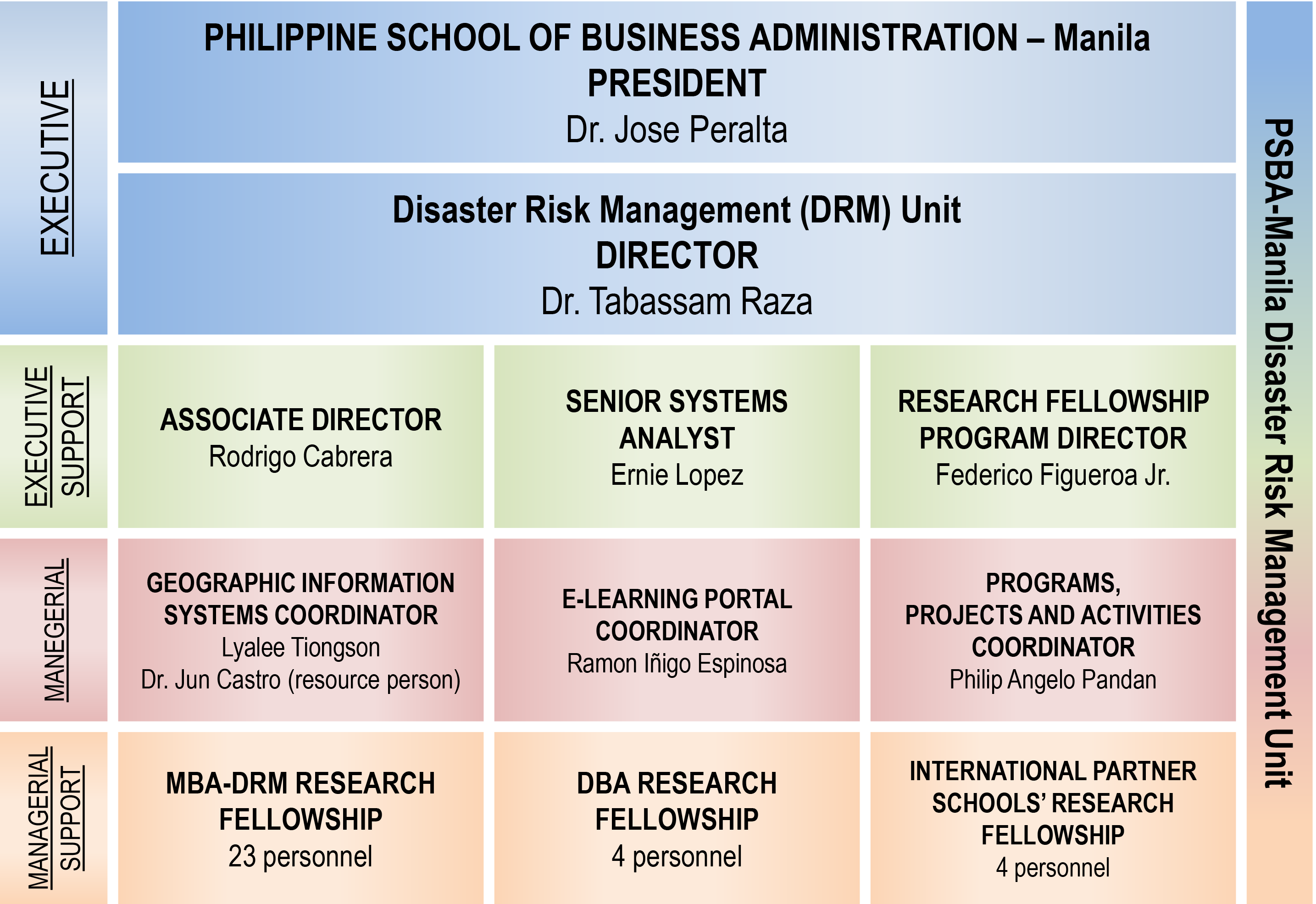 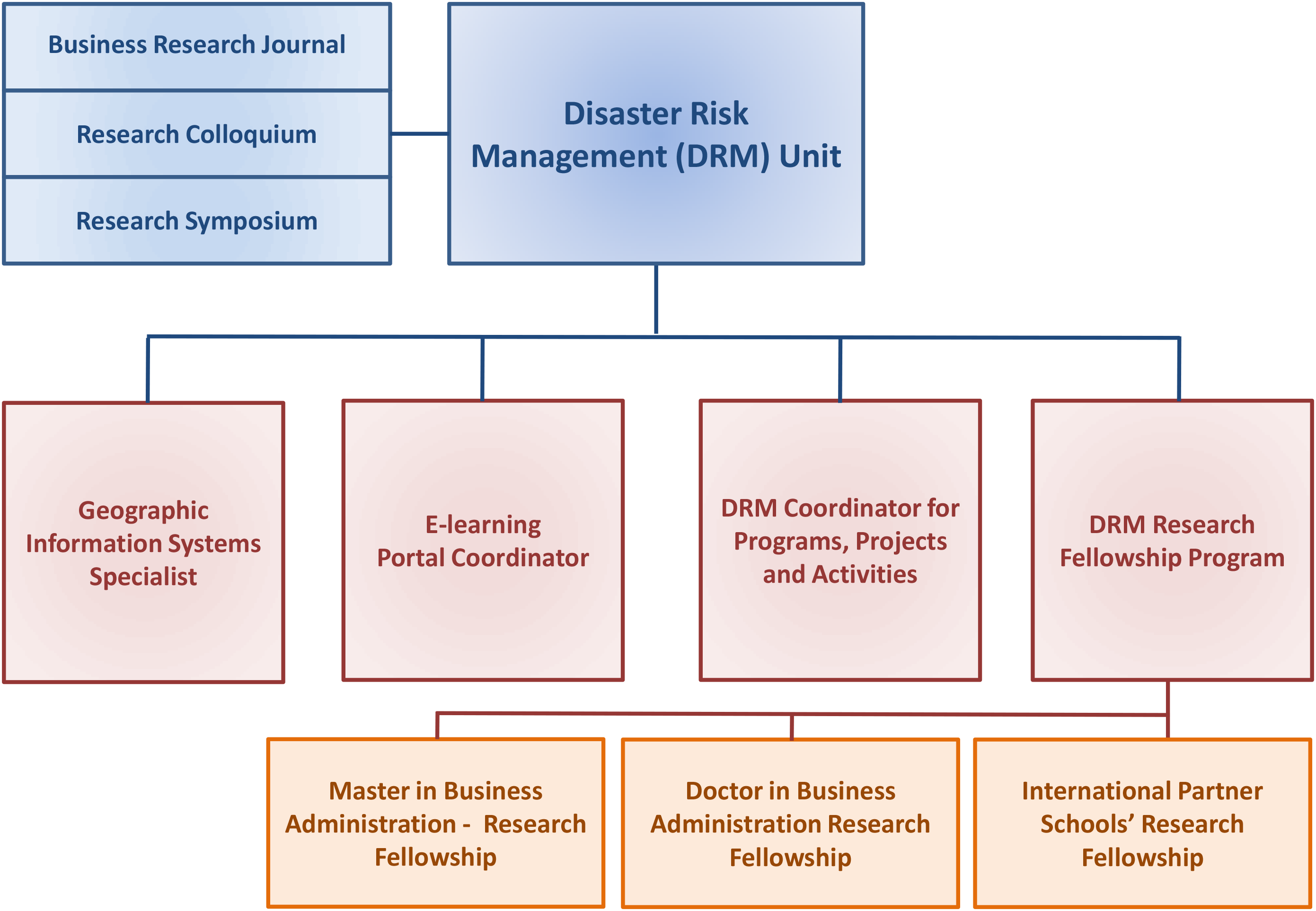